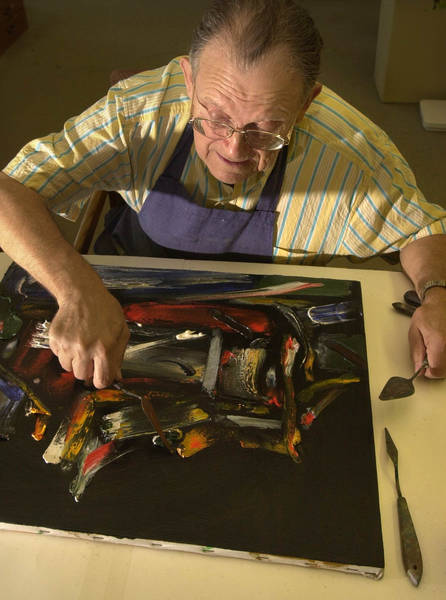 Arthur Secunda is an internationally renowned artist whose career has spanned five decades. His one man shows have been seen worldwide in numerous galleries and museums in France, Sweden, Belgium, Holland, Spain, Israel, and Japan. In the United States, he is represented in most major museums of the country, including the National Gallery of Art and the Smithsonian Museum in Washington D.C., the Museum of Modern Art in New York, the UCLA Museum, the Detroit Art Institute, and the Phoenix Museum. Known for his brilliant collages and striking graphics, Secunda has mastered all types of printmaking, even making his own paper in France and Japan. His impressive body of work includes painting, mixed media, polyester assemblage, ceramics and welded sculpture. His studies began at the Detroit Art Institute as a teenager, and continued in New York at the Art Students League and New York University. After a stint in the Air Force as an artist, he then studied, thanks to the GI bill, in Mexico, Paris and Italy, with many great artists and teachers, beginning a lifelong propensity for travel-- living and working in other countries. For decades, he maintained studios in Paris and LA.

He considers himself a landscape artist, and has developed his own iconography in representing nature, the land and its forms, as well as corresponding inner landscapes. He is known for a specific kind of color gradation and blending of forms in many media. His work tends to oscillate between the serene--striated colors in landscapes--to the expressive, as in many of his oil paintings.

After years in Paris, Secunda has maintained a studio in Scottsdale for the last decade--doing what he has done in all of the other places he has liv ed and worked in the last 50 years--creating imagery.

He has worked as a jazz musician--in Paris in the early days to support himself, and as a milkman; as an art critic, lecturer, curator, writer and publisher. Periodically, he consults at NASA where he is an image visualizer, helping translate scientific data into visual images. Highly respected as a teacher, he will spend August in Lacoste, France teaching a master class in collage and the creation of handmade artists books. (Secunda has an international following of people who subscribe and collect his dada art "books".)

Next year, he will have a one man exhibition at the University of Judaism in Los Angeles, presenting a never before seen series of expressive portrait monotypes of noted art personalities, after which he will exhibit early Mexican woodcuts at McMasters University in Hamilton, Ontario, in a two man display with Indian artist Mansaram Panchal.