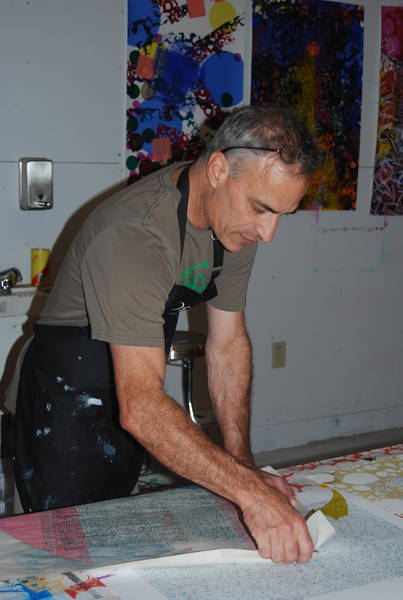 Artist and Art Educator currently working with children and young adults in various after-school programs and community art settings. I also freelance as an illustrator for an adventure novel series ‘The Protectors of the Wood’ by John Kixmiller.

Raised in NYC with love and decency by parents of strong artistic, international and liberal inclinations. A community of artists’, writers and musicians who frequented the house and family life influenced early interests in art. Attachment to printmaking and graphic art began by working for ‘uncle Joe’ (not my real uncle) at age 15 in his commercial print shop in Manhattan.

My formative ‘era’ fell somewhere between the mid 1970’s through the end of the 1980’s; a gap in history that defies definition but not without value. In brief I managed to get an education (though my advanced degrees came much later in life) travel extensively and steer clear of calamity or dissolution. I spent 10 years in California worked the theatre/circus circuit, competed in amateur fencing leagues, did the art scene, rode bikes like a maniac and lived through some pretty intense stuff. I returned to NYC, got more serious fell into a carpenters life got married and moved to New Mexico for another 5 years. By the late 90’s I was back in the NY area teaching and administering art programs as my latest incarnation. Been doing that more or less ever since as my ‘day job’ and spending as much time as possible either in my studio making screen prints (etc.) or trying to nurture some measure musical ability. While I enjoy doing the illustrations for the book especially for the discipline and exactitude they demand I really consider my major works to be my screen prints. I also design and print my own fabrics and having learned to sew in the theatre, I make interesting things with the fabric or sell it as is.