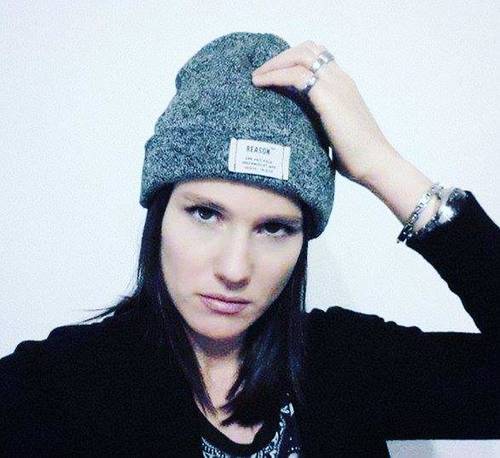 Giuditta is fascinated and curious to explore the ambiguous, the paradox, the mind faculties, the dreams and nightmares, the human and its dark face. She creates most of her artworks by using pencils (graphite) and mixed techniques on cardboard. Drawing inspiration from the Avant-garde’s Expressionism, New Figuration by Francis Bacon, cinema, contemporary photography, videogames, crimes’ archives, etc.

The artworks are generally created in a black white (pencils-support). Only little particulars are underlined, in each artwork, by evident and colored glitters, shiny spangles and little objects, emerging drastically or with difficulty, from each representation. Bright elements that symbolize the “eyes” of awareness:

-”…small details that shine in the obscurity, bright jewels, hamlets, lucky charms, indicate hope for a future of consciousness…”-

Looking at Giuditta’s drawings is like entering an ancestors gallery. The spectator’s visions are being overwhelmed by something unexpected, restless and staggering. Faces of “youngsters”, often stare at the viewer, arousing a sense of awe and submission. In this manner, one enters a dark fairy-tale where heroic children – that recall those from the Grimm Brothers’ tales – intend to save us from ogres’ and witches’ violence, thereby adopting cruel methods themselves.
These protagonists let appear deep psychological features that turn them into messengers of the surfacing subconscious, something that all cultures seem to have in common. They symbolize the “ghosts” within the human, crystallized as particular feelings or childish roles. This collection of beings, describes the singular development of the human in a society which is passing through a tranformation and an universal crisis, rooted in the lack of spirituality.