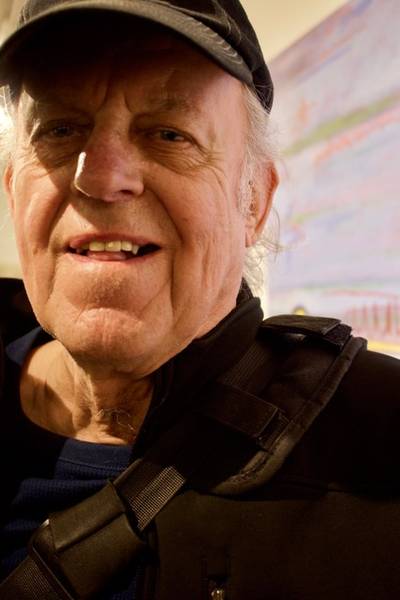 I have always been interested in unconventional approaches. This somewhat began with the advent of Rock-n-Roll. Witnessing the birth of a new attitude led me to explore it's roots; jazz, blues and country. Seeing how it all was put together influenced my approach to art. I purposely combine different techniques, forcing myself to come up with that something special which allow the techneques to work together.

My Magic Realism paintings were generated from isolating everyday objects and creating still lifes of them, with dramatic shadows heightening the form and color.

Continuing the exploration of form, I created a series of wood and paper sculptures, which I then photographed and transformed into a series of black and white paintings called Spatial Objectivisms. Through the intergration of color my next series took on the character of outer space landscapes.

Concentrating on the idea of color and movement followed a series of Kinetic Sculptures; airbrushed stripes om multiple panels of acrylic that were motorized. These ranged from continually changing abstract patterns to a clock which told the hour and minute and ended with a piece of a re-occuring sphere of color. Absorbed with this idea of the color sphere I recreated this work, omitting the motorization, and blew up the scale from fifteen inches to five square feet. The viewer preceives the painting as kinetic throuh his own movement.

Experimenting with the stripe format using silk screening on acrylic, the stripes took on a transparent look.Through this i discovered a new process of fusing color to acrylic, which has developed into my Acrylic Fusion Shadow paintings. This process casts an additional dimension of color, form and shadow; a third dimension. I feel these works embody the secret life of color.

I also woked my way through drawing, examining different techniques. One being the application of an ink wash applied to a photo process paper in a controlled manner which created a frotage like surface, forming the basis of my drawing. This led to my current approach of applying an acrylic wash on paper and then rubbing pastel and colored pencil into it, preserving the vitality of the initial brush strkes. Different bodies of work were developed within these approaches.

My portraits portray outward displays of emotion. The abstract qualities emphasize the emotional composure of the person. These are grounded by the realistic drawings. Moving on to figurative narratives, I presented people with a conflicting shadow, which depicted the person's inner feelings. Currently my subject matter of women and birds are purposely paired in unusual situations to emote a surrealistic feeling.

The return to painting led to my Form Within Chaos approach. There is a tension in the universe as well as in everyday life and I feel it acutely. Chaos is established by positioning multiple canvases on the wall in askew situations. Acrylic painted imagery on the canvases are aligned to project distinct forms potraying a unified whole.